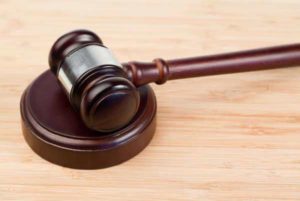 Rogers v.
Koons (960 F.2d 301) was a United States court case which focused on the
copyright infringement of a black and white photograph used in
greeting cards and other types of merchandise. The decision was important
because it focused on parody as a means of fair use. The United States Court of
Appeals for the Second Circuit found that copying a photograph without any
“clear need” to imitate the photograph can hold the infringer liable
for damages. The court decided that the photograph itself was not the specific
target of the parody because it was created as a 3D sculpture of the
photograph.

Background of the Case

Art Rogers, a professional photographer, took a
black and white photograph of a man and a woman with puppies in their arms to
be used in greeting cards and other various types of merchandise. The
photograph was entitled “Puppies”. When Jeff Koons, a famous artist,
saw the photograph, he decided to create a sculpture which would be based on
the photograph to be readied for an art show. Koons then removed the copyright
notice from the picture and gave it to his assistants to begin modeling the
picture for a sculpture.

According to
court reports, Koons asked his assists to copy as much detail as possible from
the photographs. The only changes that were made during the transition were
larger noses on the puppies, their fur was made blue, and the man and woman
were given flowers in their hair. The sculpture was named “String of
Puppies” and became a success for Jeff Koons, who was able to sell three
of the statues for $367,000.

Rogers, upon discovering that his work had been
reproduced into a sculpture, immediately took legal action against Koons and
the Sonnabend Gallery for copyright infringement. Although Koons had admitted
that he copied the work of Rogers, he used a fair use defense, claiming that
his sculpture was a parody of the original work.

A parody is a work created to mock or poke fun at
a work of original authorship and is legal under U.S. copyright law. The court,
however, disagreed with Koons, and ruled in favor of Rogers. They noted the
similarities between both works to be recognizable to the average eye,
concluding that the work was a copy of Rogers’ photograph. The court rejected
Koons’ claim of parody because it did not believe that Koons’ was commenting on
the photograph specifically and used the reproduction in another general art
form.

How Are Copyright Fees Determined